An arbitrary progression of numbers on the Gregorian calendar has us all promising to run thrice around the block before sunrise when for the past 364 days we’ve stumbled out of bed at 08:52, snagging pyjama buttons on nostrils as we go, or to forsake delicious red wine and apple crumble for undelicious tonic water and millet crumpets until we’re the same size as when we entered puberty. Whence comes the madness? 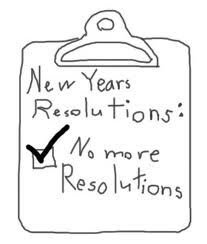 In this marvellous article, author Emma Forrest suggests we resolve to stop hating ourselves this year (for jogging and self-loathing are surely fruit of the same tree) and I’m very much down with that, although so far I’ve resisted making any resolutions at all for 2013 – not because nothing in my life needs changing, but because everything does.

And as that sentence was unintentionally melodramatic, I shall backtrack a little.

2013 is the 10-year anniversary of my CELTA and the beginning of my teaching career, and I feel like I’ve ground to a halt. I’ve taught ESOL, ESL and EFL. I’ve taught beginners and I’ve taught advanced students. I’ve taught kids, teenagers and adults. I did my next-level teaching qualification and started an MA in Applied Linguistics, before realising my heart wasn’t in it and stopping as soon as the PGCert was under my belt. I’ve forayed into teacher training (which felt like being one step removed from the action) and academic management (which feels like being paid an extra €400 a month to answer half-hourly ‘Where is…?’ questions with something more specific / courteous than ‘Wherever you left it’).

I know I’m being a brat. I realise there’s a lot I haven’t done and don’t know and could learn, and I still enjoy being in the classroom, but the fire isn’t there. In short: I’ve got the 10-year TEFL itch. So now what?

The absence of obvious ladders to climb in this industry is lamented loudly and often, so I won’t tie myself in knots over it here, but I’ve become a mid-career cliché: don’t want to be a manager, don’t want to be a teacher trainer, better become a writer. For the last year I’ve been writing a coursebook in my spare time for a Taiwanese publisher, which has been educational and frustrating in equal measure (fixed-format chapters not being particularly conducive to creativity) but which has set me thinking about how I make my living.

Why do I work for the Man? The Man I work for is in fact a very nice Man, but that isn’t the point; in the 10 years that I’ve been a teacher, technology has changed the world of work beyond recognition. ‘Work’ is a now a dynamic concept (danke schön, internet!) and freelance writing, which seemed like a hopelessly impractical career choice when I left school, now looks like a manageable challenge. Not only manageable; joyous. Saying that I’d ‘better become a writer’ puts a facetious gloss on something I’ve wanted to do since I was small but somehow talked myself out of, and the prospect of spending my days writing does fill me with joy. I know I’m opening the door to pennilessness and rejection, but the freedom to bang out my own rhythm instead of shuffling along to someone else’s seems like a reasonable trade-off. 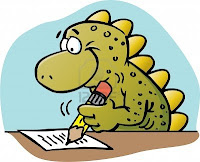 So this is my solution to the 10-year itch. If you’ve had (or heaven forbid, are having) a similar crisis I’d love your advice because it feels a bit like running away to join the circus, bar the unicycling clowns honking about the place before garrotting you with a tightrope as an elephant looks blithely on. What if writing turns out to be as hopelessly impractical a career as I feared at 18? What if I miss teaching? What if I'm...eek...not good enough? I guess the thing is just to get on and try. In 2013 I resolve to be brave, which will probably do me more good in the long term than jogging, choking down a millet cookie or signing up for a night class in contemporary tapestry.

[Images from here and here.]
Posted by pterolaur at 21:24